In 1960 a group of 228 small coffee producers in San Marcos de Tarrazú came together to establish Coopetarrazú. At this time they came together with the goal of establishing equal profits and a voice for small producers, something that was previously dominated by large producers in the region. This coop has grown to become one of the most important contributors to the economic development of the Los Santos region of Tarrazú. Today the Coop assists its more than 5,000 members with technical assistance, low-cost loans, and affordable fertilizers. About 80% of their members are small producers with farms of 4 hectares or less. They employ approximately 10,000 people throughout the year, either directly in coffee production or in supporting roles, allowing Coopetarrazú to control the entire production process for their coffee from harvest through sorting, milling and exporting. This level of control allows for constant evaluation which leads to consistent quality year after year. Grown at altitudes between 4300 and 5300 feet, this Caturra, Catuai varietals are fully washed and  mechanically dried.

The cup has medium acidity, body and sweetness with notes of caramel, cherry and peach. 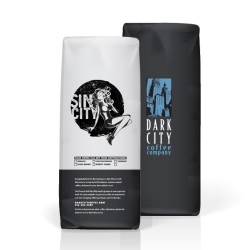 New Hot
SIN CITY
Sin City - Because sometimes you just have to.Dark City has created a blend that is right in tune with your desires; Sin City is a medium multi-r..
$17.00
Add to Cart
Add to Wish List Compare this Product
Buy Now Ask Question
Quickview 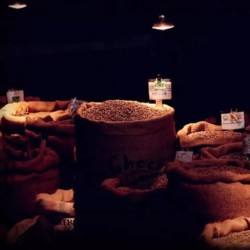 New Hot
Music for my Mother
As you would expect, this blend was created for my mother and remains her favourite. The cup has unusual depth and complexity, heavy body with a musty..
$18.00
Add to Cart
Add to Wish List Compare this Product
Buy Now Ask Question
Quickview

New Hot
Mocha Java Alternative
We created this alternative to the authentic Mocha Java in order to bring the price down. We use Sumatra Mandheling in place of the Java and Sidamo/Ha..
$19.00
Add to Cart
Add to Wish List Compare this Product
Buy Now Ask Question
Quickview

Hot
Honduras Marcala Micro-Lot Royal Reserva Natural O|FT|SG
This coffee is a blend of varietals, Bourbon, Catuai, Caturra and Typica, grown near La Paz at an altitude of 5400 feet. It is natural processed and b..
$19.00
Add to Cart
Add to Wish List Compare this Product
Buy Now Ask Question
Quickview

Hot
Colombia Huila Las Rosas Gender Equality Project
These Caturra and Castillo varietals are grown at altitudes between 5500 and 6500 feet and are wet processed, then sun-dried on raised beds.The cup is..
$17.00
Add to Cart
Add to Wish List Compare this Product
Buy Now Ask Question
Quickview